… I cheated on this month’s theme a little. I mean, I do intend on talking about some of the things that constitute contemporary realistic fiction, but I’ve decided to do so by using a selection of comics and graphic novels. Why graphic novels and comics, you ask? Well, here, let Bryan Lee O’Malley (the creator of Scott Pilgrim) take it away:

Okay, fine, he comes off a little full of himself there, but hey, this was a from a reading and which storyteller doesn’t love the medium they have dedicated themselves to? The point, though, is that I really agree with him.

People have put all kinds of restrictions on what comics can be- whether they are talking about what kinds of genres can be explored in comics, or who the comics are for, or how sophisticated they can be, or even how seriously they can be taken- but more and more I find that comics and graphic novels are tearing down these barriers*. So, as proof, here is a sampling that I thought could work this month’s theme: 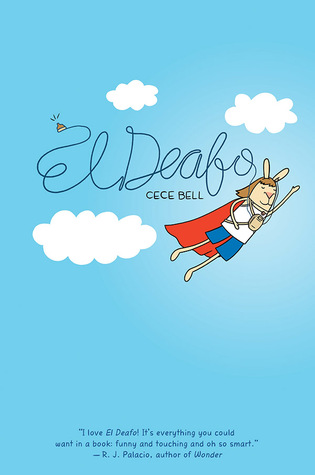 Starting at a new school is scary, even more so with a giant hearing aid strapped to your chest! At her old school, everyone in Cece’s class was deaf. Here she is different. She is sure the kids are staring at the Phonic Ear, the powerful aid that will help her hear her teacher. Too bad it also seems certain to repel potential friends.

Then Cece makes a startling discovery. With the Phonic Ear she can hear her teacher not just in the classroom, but anywhere her teacher is in school- in the hallway … in the teacher’s lounge … in the bathroom! This is power. Maybe even superpower! Cece is on her way to becoming El Deafo, Listener for All. But the funny thing about being a superhero is that it’s just another way of feeling different… and lonely. Can Cece channel her powers into finding the thing she wants most, a true friend? [X]

Why You Would Like It: The writing is honest and charming, the art is cute (though not in a way that is designed to hide any uncomfortable realities), and it is one of the first graphic novels I’ve read that focuses on a disabled child. The fact that Cece is on a quest to find a true friend is heartbreaking and compelling to read, and the fact that she (through her superhero daydreams) actively works on dismantling ableist narratives is a brilliant bonus.

Why You Wouldn’t Like It: I suppose the word autobiographical puts some readers off? I considered concocting an argument to assure prospective readers that Cece could easily be read as a fictional character, but you know what? The power of this story lies in its realities and Cece Bell is one of the realest superhero the world has. Read it. You’ll like it.

Smile and Sisters by Raina Telgemeier

Raina just wants to be a normal sixth grader. But one night after Girls Scouts she trips and falls, severely injuring her two front teeth. What follows is a long and frustrating journey with on-again, off-again braces, surgery, embarrassing headgear, and even a retainer with fake teeth attached(!). And on top of all that, there’s still more to deal with: a major earthquake, boy confusion, and friends who turn out to be not so friendly. Raina’s story takes us from middle school to high school, where she discovers her artistic voice, finds out what true friendship really means, and where she can finally smile. [X]

Why You Would Like It: With stories like these, ones that deal with family and puberty and all kinds of personal hells, comedy is a must. Well, okay, for me certainly. Thing is, Raina is just incredible at this act of balancing the awkward and sad with the awkward and comedic, and she does it all through simple (but powerful) words and movements.

Why You Wouldn’t Like It: Perhaps the art style is not for you? I don’t know. I am grasping at straws here. I was late to this party and now that I’m caught up, I can’t imagine why it took me so long to read (and love) these books.

Kamala Khan is just an ordinary girl from Jersey City- until she is suddenly empowered with extraordinary gifts. But who truly is the all-new Ms. Marvel? Teenager? Muslim? Inhuman? Find out as she takes the Marvel Universe by storm, and prepare for an epic tale that will be remembered by generations to come. [X]

Why You Would Like It: What can I say about Ms. Marvel that hasn’t already been said? It is hilarious, and sad, and touching, and then hilarious some more. (It’s been so long since a book has made me actually laugh out loud, I almost want to frame this one up.) I love that Kamala is trying desperately to balance her Pakistani identity with her American one, I love that she writes Avengers fanfiction, I love that all she has ever wanted was to be a superhero … and now that she is one, she must add that to the list of things she must figure out:

As a side-note, I also love that some of the urdu is not translated- you get to Google it, or ask friends! Trust me, the language makes it all funnier (and realer?) too.

Why You Wouldn’t Like It: Can I, just for once, get away with writing “????” in this section? *sigh* Maybe not. I guess Ms. Marvel references some other superheroes that you may not be familiar with if you haven’t read other superhero comics or watched the movies? But really, you don’t need to have read any other superhero comics to “get” this one. I suppose another drawback would be the long and excruciating wait for Volume 2? It may also be possible that this series (like many superhero comics) may never end? (Though, frankly, I am okay with that last.) 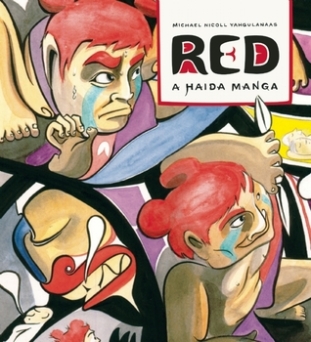 Referencing a classic Haida oral narrative, this spectacular full-color graphic novel blends traditional Haida imagery with Japanese manga to tell the powerful story of Red, an orphaned leader so blinded by revenge that he leads his community to the brink of war and destruction. When raiders attack his village, young Red escapes dramatically. But his sister Jaada is whisked away. The loss of Jaada breeds a seething anger, and Red sets out to find his sister and exact revenge on her captors. Tragic and timeless, Red’s story is reminiscent of such classic tales as Oedipus Rex, Macbeth, and King Lear. Not only an affecting story, Red is an innovation in contemporary storytelling from the creator of Haida Manga and the author of Flight of the Hummingbird; it consists of 108 pages of hand-painted illustrations, and when arranged the panels create a Haida formline image 13 feet long. A miniature version of the panel in full-color is on the inside jacket. [X]

Why You Would Like It: This book is, quite simply, a work of art. Some works of art alienate people and puzzle those who interact with them, but not this one. This is a work of art that welcomes people’s lingering gazes. The story has a myriad of influences and rather cleverly deals with colonialism and how its effects are still felt. While the writing is perfunctory, the star of the story- the bright, alluring colours and the traditional Haida art style- shines the brightest.

Why You Wouldn’t Like It: It is a fast-paced story, but the pacing may seem at odds with how much time you spend on each page. Don’t be put off. Allow the art to invite you in and take your sweet time. Both you and this incredible book deserve it. 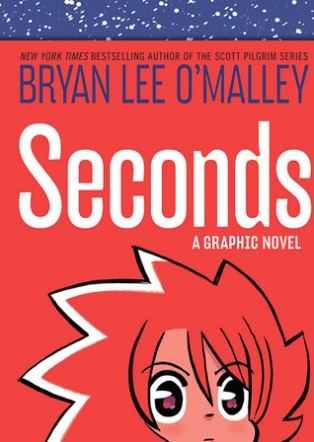 Katie’s got it pretty good. She’s a talented young chef, she runs a successful restaurant, and she has big plans to open an even better one. Then, all at once, progress on the new location bogs down, her charming ex-boyfriend pops up, her fling with another chef goes sour, and her best waitress gets badly hurt. And just like that, Katie’s life goes from pretty good to not so much. What she needs is a second chance. Luckily for Katie, a mysterious girl appears in the middle of the night with simple instructions for a do-it-yourself do-over:

And just like that, all the bad stuff never happened, and Katie is given another chance to get things right. She’s also got a dresser drawer full of magical mushrooms—and an irresistible urge to make her life not just good, but perfect. Too bad it’s against the rules. [X]

Why You Would Like It: I would recommend this one for late teens and young adults. Anyone in a transitionary state would love this, I think. It has quite a bit of fantasy in it, but really Seconds focuses on things like growing up, moving past regret, being brave, taking chances, knowing when not to take chances, learning how to love, learning (and re-learning) how to be a good friend, and so much more. The art is his usual cute style, the writing is profound, and the characters are often profoundly funny. Oh! Bonus points! I think there’s a character in this book who may identify as asexual. And she’s a rather significant character too.

Why You Wouldn’t Like It: There are some, erm, sexy times? But for a graphic novel, they are so not graphic! Seriously not worth the warning. It is, overall, a great concept that has been executed wonderfully.

Harvey by by Herve Bouchard (Writer) and Janice Nadeau (Illustrator) 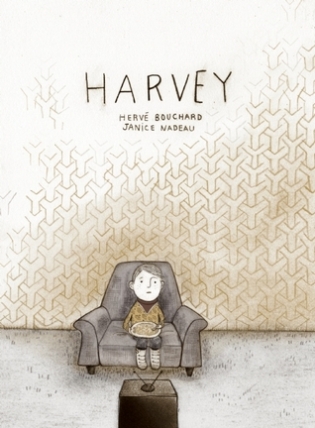 Harvey and his little brother, who is a lot taller than he is, are normal boys playing in the slushy streets of early spring when they suddenly learn that their father has died of a heart attack. Everything changes, and Harvey’s favorite movie, The Incredible Shrinking Man, suddenly begins to dominate his fantasy life. When relatives try to get him to look at his father in his coffin, he finds himself disappearing … [X]

Why You Would Like It: This is a book that deals with a parent’s death. More precisely, it deals with a boy who is dealing with his father’s death. The writing is beautiful and heart-wrenching, and with the minimal palette, the art style is perfectly complimentary to the mood of the story. I don’t know how well it may or may not work for readers who have lost someone close to them, but I do believe that changing even a thing in this graphic novel would make it rude and dishonest. It is sad and I think the best thing about this book is that it allows Harvey and his readers to experience that emotion.

Why You Wouldn’t Like It: Did I mention how it is about a boy who is dealing with his father’s death?

*I’d like to think that the growing crossover interest in Kid Lit and YA Lit is part of this reason! And with the recent push for diverse books in all forms, I am hopeful that this medium will tackle all kinds of issues, and invite all kinds of readers into some important dialogues.