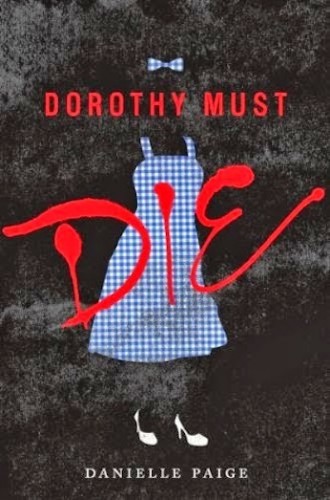 Let me start by saying that this book, as the title may imply, is not your grandma’s Wizard of Oz. It also, I must admit, isn’t so much a retelling as an envisioning of what Oz might be like after Baum’s original 14 Oz books.

In some respects the Oz that Danielle Paige presents here is a dystopic one, where the Oz of Baum’s books is a magical utopia with good overcoming wickedness at every turn. Paige takes a somewhat cynical and colonial look at how Dorothy, crowned Princess of Oz, has turned “Goodness” into a dystopian regime that resembles Orwell’s 1984 with Dorothy invoking things like the Happiness Law forcing everyone to be happy, or at least appear happy, at all times (when, all that really matters is that Dorothy is happy). If you recall, in one of Baum’s books the Princess Ozma crowns Dorothy a princess of Oz as well – and it’s really from this that the seed of the dystopia, and beginning of Dorothy’s colonization of Oz, is planted.

But let me back up…

The Story: Honestly, the story is fairly straight forward. Amy Gumm, our trailer-trash hero, is suspended for fighting with a pregnant female bully. Sentences to a week of looking after her druggie mother, Amy heads home to her trailer just as the weather turns ugly. Her mother leaves her to attend a tornado party and Amy, trailer and all, are transported from a reality that seems frankly awful and to be leading to Amy only to a dead end life, to wonderful land of Oz. Despite Oz not being as wonderful as the film made it seem that it might be, actually it’s kind of horrific I couldn’t help but reading that this Oz is at least is a world in which Amy, an outsider, has a chance to becoming something and have some power of her own. For as Amy is told early on in the narrative…

“You are from somewhere else. You can do something.”

And in this way the book transforms, for me, from a dystopia into the colonial wish fulfilment of Dorothy and, it seems, potentially Amy.

Dorothy’s regime controls movement, thoughts and actions through surveillance and the brutal hands of her henchmen: Scarecrow (now a mad scientist), Tin Man (a judicial thug of sorts) and the Lion (an army general with some pretty gruesome critters at his disposal). Yet underlying this dystopian set up there is an underlying theme of unravelling that old “there’s no place like home” mentality – for what better place could there be than one where everyone worships you and must do as you say. Actually all the brutality, the grime  and creepiness of this new Oz fade when one realizes that indeed, this place is still better than home.

Therein lies the crux of the story.

Amy is the only one that can defeat Dorothy and bring down the Dorothy regime (how did we end up with a “chosen one” story here?) – but can she really be any better than Dorothy in the end? Can she defeat the evil tyrant and then immediately give up the intoxicating power of magic and control over an entire land and return… home?

In this first installment, we don’t get anywhere near there. The book is all world and character building, and my one complaint is that it takes an awful long time to get anywhere, in this way it had me guessing, but one Amy is recruited by the Wicked faction and finds that special someone who can inspire in her the power she needs to harness magic… well, your average YA romance adventure began to unfold (about 200 pages in). Don’t get me wrong, I still enjoyed it, but I do hope that some more twists will be coming in the next books that will deviate from this very average plotline. I enjoyed the world of Oz and that it’s characters are angry and full of vengeance (with good cause! Would you want some girl from somewhere else taking over your world and mining it for all that it’s worth?).

As for Amy, well, in many ways she is your average white trash girl – she has spunk and street smarts if not book smarts (and it really smarts when someone talks about her “potential”). She is often cowardly, but also determined to try and do the right thing (according to her), if she can. She has lots of flaws but enough redeeming qualities, and quick wit, to keep me interested in her movements.

Paige clearly had a really good time writing the book, which I think could account for some of its lengthy exposition. There are a lot of details in this book that draw from the source material, which was a lot of fun. Finding within this updated and very dark book little cameo’s by Baum’s original characters like Mombi and the Patchwork Girl helped to add to the ambiance – if you have read some of the old books.

All in all I think that my biggest complaint was how incredibly negative in tone and action this book was. I just hadn’t been expecting it. I really enjoy the obvious colonial implications of the text while the “dystopia” could actually work for the book a little bit more with just a little more nuance. Perhaps it will develop further in the next books, but I think then perhaps a negative of this book could be it’s length and pace.

Overall, however, this was a very interesting read and certainly a good one for fans of the old series and/or the film. Be prepared for characters to die and disappear (frequently). Be prepared for some nasty, brutal battle scenes and some seriously deep negativity – but also enjoy the imagination and thought provoking nature of what Paige is presenting us with.