A couple of weeks ago, I read and reviewed the very excellent The Water and the Wild by K. E. Ormsbee. I was so struck by the novel that I hunted down the author (no rifles, spears or arrows were involved) and after gushing to her about how much I loved her, asked her if I could interview for the blog. She very kindly agreed and here we are. Enjoy.

In her wild, early years, Kathryn taught English as a Foreign Language, interned with a film society, and did a lot of irresponsible road tripping. Her crowning achievement is that the back of her head was in an iPhone commercial, and people actually paid her money for it.

Nowadays, she teaches piano lessons, plays in a band you’ve never heard of, and run races she never wins. She likes clothes from the 60s, music from the 70s, and movies from the 80s. She still satiates her wanderlust whenever she can.

1.      You capture the eccentricity and quirkiness of Lottie so very well in The Water and the Wild. Is the character of Lottie inspired by anyone? Is there a story about how she came to life in your mind?

Lottie Fiske isn’t inspired by any one person in particular, though little bits of her personality came to me from friends and acquaintances. I wrote and rewrote The Water and the Wild over the course of several years (2008-2014), and Lottie evolved significantly during that time. In my very first draft of The Water and the Wild, her best friend Eliot didn’t even exist—which is hard to imagine, considering how central he is to the story now! It was while I was writing Eliot into the manuscript that I spent a lot of time with Lottie in my mind, asking every possible little question and daily imagining myself in her shoes. In that draft, Lottie really came into her own and developed all her little quirks and deepest motivations. Now she’s as familiar to me as an old friend.

2.      What I most love about The Water and the Wild is the world you so vibrantly create. Tell us a little about your writing process?

I’m a very visual person, and I first began The Water and the Wild because the image of a white finch in a green apple tree got stuck in my mind and wouldn’t leave. My WIPs always start out as character studies, and The Water and the Wild was no exception. After I’d written a description of the apple tree, I took time to develop characters who had already been brewing in my mind. For instance, I’d created the character Fife Dulcet seven years earlier and just couldn’t find a story where he belonged until The Water and the Wild. It was only after I’d spent a lot of time developing the central characters and figuring out how they related to each other that I wrote out a plot and began world building. I knew I wanted to set Lottie’s story in a fantastical land, and I drew lots of inspiration from my travels in Europe and my love of British poetry, folklore, and children’s literature. After I’d written a rough draft, I returned to the story and let my imagination run wild, taking time to steep myself in each stop of Lottie’s journey and fill in the details of the world around her. I still use this process for all my books: characters first, then plot, then rough draft, then several revisions that enrich the story.

3.      Now for a tough question (haha). Alison Waller, a children’s and young adult literature scholar, in her excellent work Constructing Adolescence in Fantastical Realism talks about how children are rarely allowed to create the culture they consume. In other words, childhood, the kind we read about in novels or view in movies, is a construct of adults and not truly reflective of “childhood” as it really exists. How do you feel about her assertion as a children’s writer?

Oh, what a great question! I agree that children’s literature is unique because it’s written primarily by people who are no longer young readers. That dynamic is especially evident in the many children’s books, old and new, written to prescribe rather than describe the behaviour of their target audience. Growing up, I hated books that had “morals to the story.” I just wanted to read stories about characters I could relate to and journeys that felt real. I loved the Chronicles of Narnia, the Wayside School series, and everything written by Roald Dahl. Even though those stories were in many ways fantastical, they all rang true to me. Their characters were flawed, their villains terrifying, and their worlds fascinating. When I read those stories, I didn’t feel talked down to as a reader; I felt like I was part of the adventure. That’s the kind of feeling I tried to capture when I was writing The Water and the Wild. I’m not eight, twelve, or sixteen anymore, so I will never be able to fully recapture how I saw the world at those ages. I don’t think any adult writer can recreate childhood as it truly exists for a child. But I do think it’s my job as a children’s writer to do everything in my power to understand the perspective of my readership, to stay in contact with young readers, and to be as honest as possible in my storytelling.

4.      What were your favourite books when you were a child? Are there any contemporary writers whose work has influenced you?

As I mentioned, I loved the Narnia books, as well as books by Louis Sachar and Roald Dahl. Other favourites include Alice in Wonderland, Charlotte’s Web, Anne of Green Gables, Tuck Everlasting, A Wrinkle in Time, and the Harry Potter series. As for contemporary writers, I’m a huge fan of Neil Gaiman. I love how he writes fantasy—with all the grisly, unsettling bits intact. And they may not be writers of books, but I adore the works of Anais Mitchell, Laura Marling, and Arcade Fire. They are master storytellers.

Well, this is a bit cruel, since the book doesn’t officially come out until September, but I absolutely loved Marci Lyn Curtis’ debut YA, The One Thing. Very rarely does a book make me laugh or cry out loud, and The One Thing moved me to do both on multiple occasions.

6.      Tell us about the upcoming sequel to The Water and the Wild. What should we look forward to seeing in the book? Does it have a title (I’ll take any tidbit!).

Aaah, I am dying to share EVERYTHING about the sequel. There’s no official title yet, but it’s slated for a Fall 2016 release. Many characters introduced in The Water in the Wild will be back in the spotlight, and Book 2 will also introduce some brand new characters and locations that I’m wildly excited about. There will be more journeys, more danger, and, of course, more poetry! 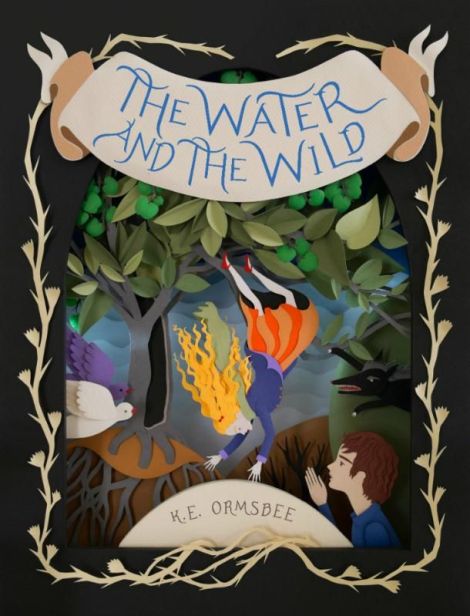 7.      I believe you have an upcoming YA novel (please correct me if I’m wrong and if I am, ignore this question). How is writing for younger readers different from writing for teens?

I do, indeed! It’s called Lucky Few (title subject to change) and will be published by Simon & Schuster in Summer 2016. The story is about a homeschooled girl and her neighbour, a boy struggling with death anxiety. Lucky Few is realist fiction written from a first person POV, so it’s quite different from The Water and the Wild. I’ve found that my YA projects come about much more quickly and naturally than my MG projects do. Which isn’t to say I have more fun with one or the other! All of my manuscripts have entailed their own unique set of challenges. For example, The Water and the Wild required a ton of behind-the-scenes world building, made-up history, charts, and maps that will never see the light of day. While I didn’t have to draw a map for Lucky Few, I did have to do a bunch of “real life” fact checking. And of course there are some other readily apparent differences, like the level of mature content in my YA. However, I don’t see a huge difference between my books at their cores. The execution might look different, but I think what’s important is never making the themes of my books more “palatable” for younger readers. I hope that all of my stories are equally boldfaced when it comes to asking big questions.

Thank you so much for having me on your blog! I’m so excited The Water and the Wild is officially out on bookshelves, and I hope that, should any new readers choose to join Lottie Fiske on her journey, they have an enjoyable read!

Remember folks, The Water and The Wild was published on April 14th and should be in bookstores everywhere. If you cannot afford the book, ask your library to buy a copy! It’s that good!