Kate Elliott did a wonderful interview for us in 2014 and we have her here again to talk about her writing process and to drum up some excitement for her brilliant (I’ve read it so I’m not just saying so) and upcoming YA debut novel Court of Fives. As a child in rural Oregon, Kate Elliott made up stories because she longed to escape to a world of lurid adventure fiction. She now writes fantasy, steampunk, and science fiction, often with a romantic edge. It should therefore come as no surprise that she met her future husband in a sword fight. When he gave up police work to study archaeology, they and their three children fell into an entirely new set of adventures in dusty Mexican ruins and mouthwatering European pastry shops. Eventually her spouse’s work forced them to move to Hawaii, where she took up outrigger canoe paddling. (source) Find her at her website or on twitter.

The Writing Process: How One Writer Works

I look at the writing process in two ways:

Before I go any farther let me make my standard disclaimer: I can only speak for my writing process. My process may or may not be useful to another writer (although I always enjoy reading about how other writers approach the work). My one rule for writers is: Figure out what works for you. And always remember that what worked on the last project may not work on the new one.

Certain elements of my writing process have been in place for as long as I can recall. People often ask novelists if they are “plotters or pantsers,” that is, do they outline before they write or do they figure it out as they go? I write somewhere in the middle. I can’t walk blind into my stories, feeling them out as I go. But I don’t outline down to the chapter and scene particulars before I start. Usually I begin with a sense of the thematic and emotional feeling I want for the novel/series. Encounters and scenes and confrontations develop and accrete in my mind around which the larger plot adheres. Things gets written down on scraps of paper or as notes on my computer. Big sheets of graph paper and/or a white board also work well for me when I want to make columns with characters and their “important plot points” or when I want to write out events and link them up with lines and arrows so that it looks like a huge brainstorming chart (although it isn’t quite that). Currently I also use Scrivener when I need to do more intensive pre-writing plot organization with a second or third book in a trilogy (because with later books in a series certain events are already set up and waiting to unfold). As I write, and the closer I get to the end, the more I do tend to tightly outline the next few chapters and what exactly needs to happen in them to move the plot forward. However, some of my best and most brilliant plot twists have happened during the course of writing. For me, a person who learns kinesthetically, there is something about the physical process of actually writing–the words flowing out through my hands–that brings new ideas and connections to the forefront. Therefore on the whole I think that rather than defining myself as plotter or pantser I would say I work best in the ambivalent space where I mostly know where I’m going but not quite how I’m going to get there. How about my schedule of writing? How long do I work? Long ago, in a library far far away, my younger self used to block out four hours at a time to work. Four hours was long enough to get a significant chunk of draft written if I focused the entire time, and it was as long as I could go without needing to eat and drink. Even now I find that a four hour block of time is as long as I can concentrate before I need a break, and I often wonder if I inadvertently set in that habit during the years before I started publishing. Having said that I should note that I don’t write only four hours a day. Some days I might write less, and some days I might work twelve hours (although always with breaks). First drafting drains my head far more than revisions do, so I can manage fewer hours of first draft per day because I find it by far the most exhausting part of the writing process. Meanwhile, revision has become more like problem solving, a process that’s both challenging and positive, so I can work those aforementioned twelve hour days for many days in a row until I’m done. But if I’m writing first draft, which I find creatively exhausting, I schedule days off to make sure I don’t burn out.

What about the actual drafting process?

Here is my basic process as an approximate outline, although this varies between individual books:

How has YA been different?

With YA I turned in the second draft, so I did all stages of major revisions with my editors. We discuss many elements of the story and the writing, and brainstorm how to solve thorny issues, and I like that (it helps that my editors are fantastic). The two things we concentrated on most were:

A fast read is one of the hallmarks of the modern YA style, brought about in part (I believe) by the influence of television and gaming on narrative, although to be fair the fast-paced popular serial with one jaw-dropping action scene cutting into the next goes back to the early days of film and farther back to the days of the penny dreadfuls, pre-20th century popular serial fiction. In YA there can be no lag, no drop in forward momentum. That doesn’t mean there can’t be quiet moments or intimate conversations but rather that always there must be a sense of propulsion, an unanswered question, an act still to be completed, a sense of incipient action, a piano waiting to drop. Often I was asked to end a chapter with a more “page turning” line.

Worldbuilding huge epic fantasy worlds is one of my all time favorite things to do, but in YA I can’t layer in as many details nor can I assume that readers will want to know the full genealogical history of the kings and queens of Efea even though in an adult novel I would have more room to engage with that background material. With the YA my editors really really made me work on trimming out every world building detail that didn’t have a direct bearing on the plot or characters. They also had me focus on WHERE I placed the details that stayed in. Rather than layering in information earlier to build up the reader’s overall knowledge of the world and culture(s), I often ended up moving information right to the place it was needed to directly impact on or make understandable a plot twist or a character decision. Also, I worked on deciding which details I needed for book one and which I could move into books two or three because their revelations would be more germane to the plots of those books.

Frankly, working through my first YA novel has taught me a great deal about delineating a world with fewer words, and I think I was able to put some of the lessons learned about pacing and incisive worldbuilding details into good use in my forthcoming adult epic fantasy Black Wolves (coming this November from Orbit Books). Overall I would say writing YA has helped me in writing adult fiction because it has enhanced my ability to judge how well images and emotions in my head are coming across on the page. Clarity is hard, but clarity is vital: Where the reader’s vision connects with mine is where the magic happens. 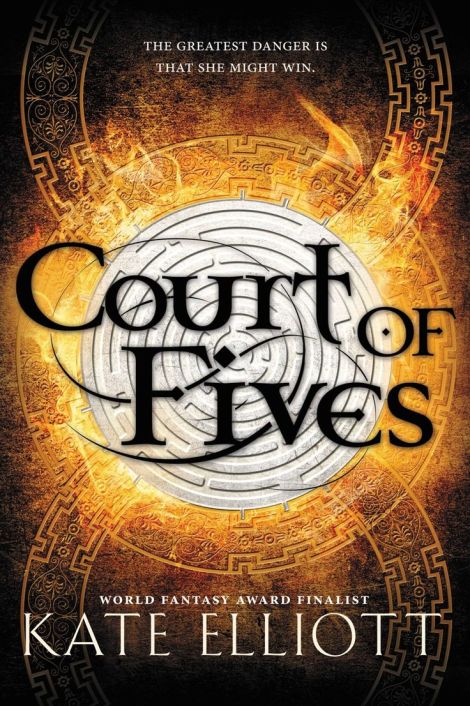 Out August 18th. Preorder your copy!