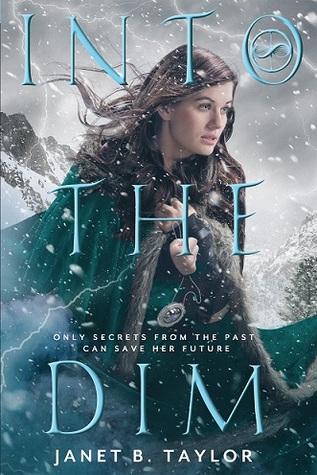 Into the Dim by Janet B. Taylor features time-traveling, a missing mother (as mothers are wont to be in YA novels), secret societies, a lovable rogue, and a badass queen.

Hope Walton’s mother’s body is never found but Hope’s father tells her there is no way she could have escaped the explosion that destroyed a building the day she was supposed to be teaching there. Hope has no choice but to accept her mother’s death as fact rather than speculation. Her grief is not helped by her father moving on and finding a replacement or her step-grandma’s increasing hostility towards her. So when Hope’s unknown aunt (mother’s sister) asks that Hope come and spend some time with her in Scotland, Hope decides to accept because anything is better than enduring her father’s new happiness and her grandma’s evilness.

So off she goes to Scotland even though she has a crazy phobia of flying. In Scotland, she finds more than she had bargained for. First is the place itself. A house (I don’t think it is a castle but I, for some reason, remember it as such) full of people she doesn’t know but who know her mother extremely well–better, Hope suspects, than she does. She finds a pair of siblings: the sister she gets along with, the brother is an ass and his hostility got old very quickly. (Hint: one side of a love triangle, perhaps.) She has a fated encounter with a lovable rogue who is very pretty to look at, is exceedingly witty and full of banter. Hope has a lot of feels for him but more on that later.

She also finds out that her mother is part of a secret society of time-traveling thieves who have very recently turned into new leafs and no longer thieve. And um, more importantly, she finds out that her mother is not dead at all–wait, actually, she is dead in this time but very much alive in another. She is stuck in the 12th century due to the evil (what else could they be?) machinations of the leader of their rival time-traveling secret society.

And it is up to Hope to rescue her mother from the plague-ridden world that is the 12th century.

Okay, so that’s the story more or less.

So yeah, this book is a mixed bag of apples and it mostly depends on the expectations with which you go into it. The parts I liked, I liked a lot and the parts I didn’t like, I didn’t like a lot. So I guess read at your own discretion.