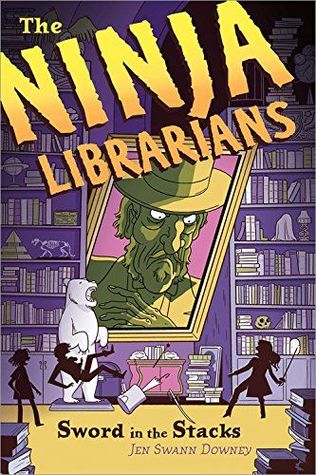 In 2014, I reviewed the very accidental Ninja Librarians: The Accidental Keyhand by Jen Swann Downey and when she contacted me to see if I would be interested in reviewing the sequel, I did all but burst into song (because I can’t sing and my singing is a weapon and I had no wish to harm anyone at that point).

I was especially keen to see what Dorrie, the protagonist of the novel was up to, and how brother was doing. Her crazy family with the trauma-causing toddler sister and her mysterious aunt were also reasons I wanted to read the book. But the biggest reason I wanted to return to Dorrie’s world was the Petrarch library. Imagine a library filled with countless books you will never be able to read in your entire life. Okay, that sounds like a nightmare but look on the positive side, you will never run out of the books and one must never discount ghosts.

Sword in the Stacks opens with Dorrie’s family in various stages of distress due to her demon baby sister having a situation with thumb tacks. Babies. Dorrie is on pins and needles (maybe literally) not knowing whether she will be allowed to return to the lybrary to train to become a lybrarian. But she needn’t have worried. She and Marcus are allowed to return to the lybrary and resume their training with some provisions from their parents who are not at all sure about sending their children to a different dimension they are not sure they even fully believe in.

Upon their return to the library (after a brief and tense affair trying to get past a horrid librarian in the town library which is where the portal to the Petrarch lybrary is located) they find that the nemesis of the Petrarch lybrary are back and stronger than ever. The nemesis has agents all over the world whose aims is completely opposite to what the lybrarians are trying to do. They want a monopoly on literacy and the spread of literature; if left to them, reading and literacy would become exclusively the right to a certain few and the masses would be kept illiterate and without a space and method to grow intellectually.

The sequel shows growth in Downey’s skill as a writer and gives readers a broader glimpse of her ability to create believably flawed characters who still win the readers’ sympathy and support. Dorrie and Marcus learn that the repercussions of their unintentional actions (read the first book for more elaboration) are greater than they thought and Dorrie in particular feels the censure from her fellow students far more acutely. Marcus is in the throes of an unrequited love though this leads him to becoming better than he probably thought it would.

The book is full of fun twists and forays into the past at several interesting points. Dorrie and her friend are sent into a time when the suffrage movement is in its nascent stage but contrary to their expectations they are sent to help the people against the suffragettes because freedom of speech belongs to everyone–even those you don’t necessarily like. Dorrie learns that judging people simply because of first impressions is incredibly wrong and can blind you to a person’s true worth.

I loved the friendliness and camaraderie of the students apart. The dialogue is fun and the comedy is also much appreciated. Dorrie’s internal conflicts are greatly explored and her worry about her motivations are subtly integrated into the narrative.

I most loved the fact that the expected mean girl character is given unexpected depths. The relationship that develops between the mean girl and Dorrie is by no means a warm one but there is a certain respect each falls for the other and I appreciated that. You don’t need to be friends with everyone–you can’t, but you always need to respect every person as person of value.

This was an incredible installment in the series and I already want the next one. I want to know what crazy adventure Dorrie and company will go next because I can bet you all it will be a wonderful ride. If you haven’t started this series, you need to get on it asap.